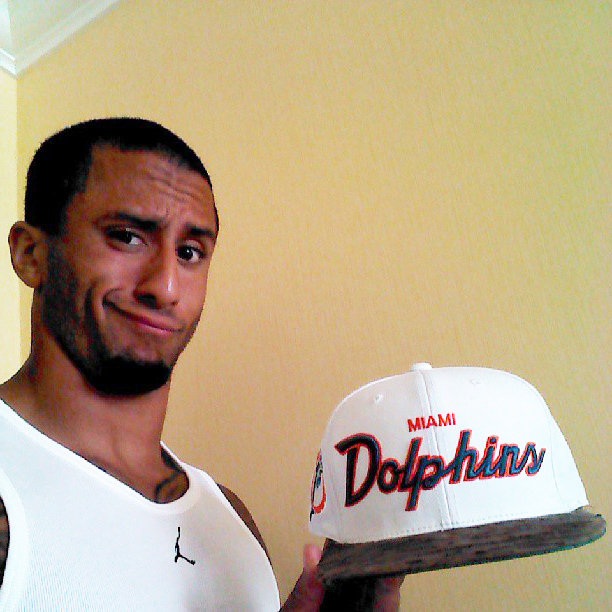 It’s hard to imagine now, but at the beginning of the current decade, Colin Kaepernick was primarily known for being a promising young quarterback.  Even then, he seemed to relish an image as something of an antihero, emerging from the ignorant noise of his loudmouth, no-nothing detractors.  This goes back at least as far as his first commercial, when a younger, much shorter-haired Kaepernick starred in a three-minute (!) spot for headphones, of all things. (Just imagine him trying to put those things on now.)  We see Kaepernick getting off a bus, as thousands of feral-like fans try to viciously shout him down.  Kaepernick, with a sense of cool not seen since The Fonz, ignores them all, stoically listening to a song titled, “I’m The Man.”  Of COURSE you are, Colin.

At the time, this was a curious ad. Who in the ACTUAL world hated Colin Kaepernick? He was an emerging star, helping to lead his 49ers to the Superbowl in a rookie season- very marketable, and hardly the polarizing figure that this ad portrayed. Perhaps disappointed by his LACK of notoriety as his star began to fade in 2013, Kaepernick was spotted in public wearing a Miami Dolphins hat- something kind of weird for a quarterback of the San Francisco 49ers to do. Though somewhat obnoxious, it was far from the stuff of full-blown outrage. Still, there were a few 49ers diehards that took the bait, complaining about Kaepernick’s disloyalty- and, in an act of foreshadowing of much bigger things to come, disrespect. Finally, Kaepernick had his real life targets to ridicule, and ridicule them he did, posting a very sarcastic looking picture of himself holding up a Dolphins hat. Making less headlines on the field, Kaepernick seemed to relish the notoriety off the field. 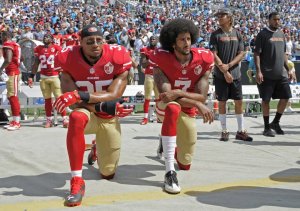 Fast forward another three years to 2016.  Barely on the public radar by this point, Kaepernick grew his hair out, generating his off-field persona as a social justice warrior for a community that, quite honestly, he was never part of.  That’s not to say he doesn’t actually care about this community, as only he knows his true intentions- and to be fair, he has donated lots of money to causes he advocates.  (This is something ALL successful pro-athletes, entertainers, and multi-millionaires in general should do, but that’s for another discussion.)  But regardless of his intentions, the methods Kaepernick used were not exactly constructive towards advancing his newly adopted cause(s).  Rather than bring people together to try working on practical solutions, Kaepernick deliberately stirred the pot, preaching to the choir of people who already believed what he was saying, while deeply alienating those who didn’t, with an incendiary press statement about the United States.  While there are certainly plenty of issues to discuss regarding this country, including that of the troubling relationships between the police and the inner-city communities which they serve, Kaepernick’s initial statement- and this is for those who say Kaepernick’s protest is “only” about police brutality- was a far more sweeping condemnation about the country that made him a rich man, stating that he refused to “show pride in a flag for a country that oppresses black people and people of color.”  (I suppose it’s also too oppressive for him to vote, as he skipped the 2016 election altogether.)  And while we’ve all spent WAY too much time already “debating” (actually, screaming at each other) about the merits and liabilities of kneeling, how about the fact that Kaepernick actually started his protest by sitting on the bench throughout the anthem?!  (It wasn’t enough for him that he’d spend the next three hours doing that?) It was only after realizing it would be better PR for him to kneel, and the rest is history.

And what about the socks controversy? Before becoming the world’s most famous shoe salesman, Kaepernick sported some rather nifty socks, showing pigs wearing police hats. Kaepernick responded with his usual eloquence- seriously, he’s a smart man- along with his typical faux indignation, lamenting this distraction from “the real issues”.  But come on- does someone as intelligent as Colin Kaepernick really not know that these socks would generate a “distraction”? It seems like a reasonable assumption that he went out of his way to purchase these statement-making socks- it’s not like they sell them at Walmart!

And hey, speaking of big, heartless corporations, enter Nike into the picture. Not afraid of exploiting controversies any more than they’re afraid to exploit third world workers- this is a company that once cynically used Tiger Woods’ infidelity to sell their products– they recruited Kaepernick to be the new face of their marketing campaign, under one of the most ironic marketing slogans in American history, “Believe in something. Even if it means sacrificing everything.” For the sake of argument, let’s assume that everything Kaepernick stands for is pure and just, as are his motives. What exactly is he sacrificing? Already worth more than he’ll ever be able to spend in his life, Kaepernick’s unremarkable talent was simply not enough to justify the PR headache that any NFL owner surely would have had to deal with, had they signed him. Instead, he was signed by Nike, making far more than he ever would have as an (AT BEST) run-of-the-mill quarterback. And for this, he’s being compared to Muhammed Ali refusing to serve in Vietnam- or even ROSA PARKS?! Only in today’s America can this be done with a straight face, just as only in today’s America can this be consider “sacrificing everything”.

But give credit where it’s due- Colin Kaepernick has achieved the outlaw, antihero status he longed for, probably beyond his wildest dreams, while Nike’s sales have spiked upwards. By hitching itself to his wagon, Nike made a bold but savvy move- alienating Trump’s MAGA crowd, but becoming the hero of the left- a group normally associated with being AGAINST big corporations.  Any boycott Nike will see from this PR stunt will likely be far outweighed by the sales they will generate, as early indicators seem to suggest. At the end of it all, the only “sacrifice” made will be of the Nike products that are being burned to a crisp by the misguided counter-protesters, thinking they’re making some sort of statement besides, “We’re not very intelligent.”  They’d have been far better served donating those clothes to charity, and simply stating that they’re never buying Nike again.  But that’s just not how things are done these days, in a highly politicized environment filled with venom, rancor, and silliness.

As for “The Man” Colin Kaepernick, we’ll likely never see him take another snap in the NFL again.  That’s too bad, because had he done so, he’d likely remind us of the REAL primary reason why he’s not in the NFL anymore- quite simply, he’s just not all that good.  Instead, he gets to be the martyr for a cause that he didn’t even expand beyond the base of people who already agreed with him in the first place.  No matter.  This whole thing is making Colin Kaepernick a rich(er) man, to the point where even HE will have to say, “God Bless America.”

This is a text widget. The Text Widget allows you to add text or HTML to your sidebar. You can use a text widget to display text, links, images, HTML, or a combination of these. Edit them in the Widget section of the Customizer.