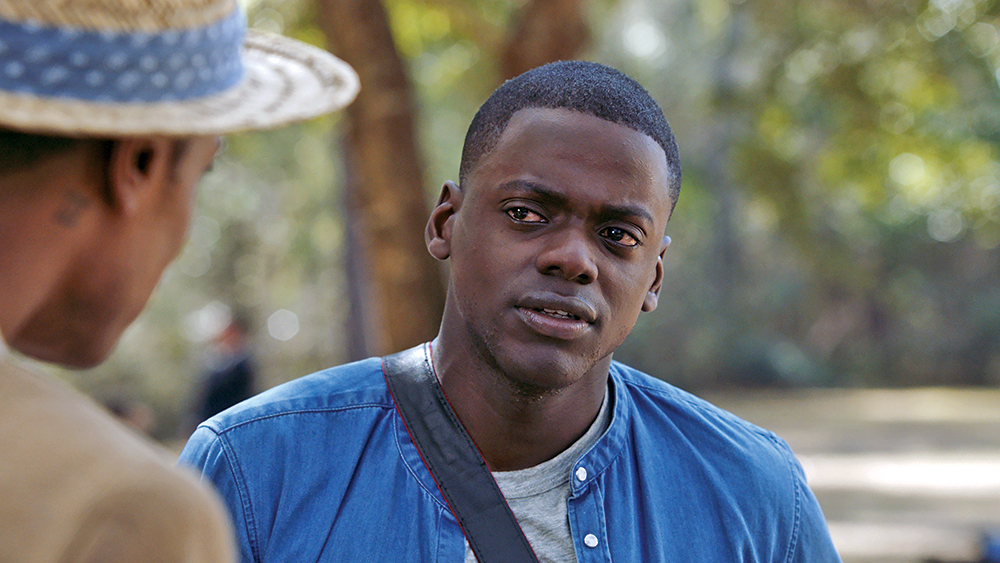 When discussing the highly acclaimed “Get Out”, there are two separate elements that need to be considered.  It’s hard to judge them individually, as they’re so closely connected.  Nevertheless, I’m going to try anyway…

“GET OUT” The Movie

All in all, I thought it was pretty entertaining, particularly the first two thirds.  I was somewhat puzzled by the “R” rating for a while, but towards the end, they more than made up for it.  I thought the acting was very good- not necessarily in a traditional sense, but each character did what they had to do.  The protagonist, Chris, was intelligent, likable, and cynical.  His girlfriend Rose seemed trustworthy, compassionate, and a bit naive.  There was something clearly not right about Rose’s father, as he seemed almost intentionally awkward in trying to prove he wasn’t racist- an early queue to the audience that all was not as it seemed.  The mother was very mercurial, as she seemed the most in-tune with who Chris truly was, yet didn’t reveal her true intentions- neither to the audience, nor to Chris.  Rose’s brother was kind of gratuitous in the grand scheme of things, but seeing his friendly banter turn outright racist as he got drunk was cringe-inducing, in an effectively tension building sort of way.  It was also a good contrast between the other minor characters’ overt racism, who were so over-the-top in their ignorance and rudeness, it was more funny than infuriating to witness.  As for the other black people in the movie, their odd behavior was the biggest mystery of all, with the white people (or should we say “caricatures”) being a very close second.  Last but not least, Stephen Root, as the one white male who seemed to have some redeeming qualities, turned out to be arguably the biggest scumbag of all.  (Though, truth be told, it was probably a multiple-person tie.)  In a nutshell, the setup was perfect.

Nevertheless, this was far from a great movie.  I felt like the scene where the mother hypnotized Chris- producing the iconic closeup of his teary-eyed face- somehow managed to simultaneously have too much going on, while not being properly explained.  It was effectively done and sufficiently chilling, but the premise was confusing.  In the guise of helping Chris to quit smoking, she takes him to his worst memory, to put him in a “sunken place”, to prepare him for the process of transformation?  Wait…what??

Then, there was the big revelation, which turned out to be…body switching.  Okay, I admit that there were some clever clues, and I appreciate movies and TV shows that give the audience a chance to stay a step ahead of the game.  (The Sixth Sense, Arrival, etc.)  I just wished there was a more satisfying explanation for all this creepy behavior, which dominated more than half the movie, than “the ol’ switcharoo”.

Also, this movie was sold as a “comedy-horror”, and while director Jordan Peele is a genuinely funny man, I really didn’t find much humor in this movie at all- good, bad, or otherwise.  Were we supposed to laugh uproariously at the wacky sidekick, who didn’t get integrated into the main story until the very last scene?  I’m sorry, but he just didn’t do it for me.  He wasn’t terrible, but I don’t really remember laughing out loud at anything he said.

By far, the biggest (and most confusing) error was Chris finding out that his sweet girlfriend was in on it the whole time…twice!  First, Chris discovers a whole bunch of pictures of Rose with a number of black men she had dated- and one woman, who happened to be the family maid- after saying that Chris was her first one.  Right there, we know Rose is no good.  But then, not long after, we see Rose pretending to be horrified at her family’s actions, as Chris pleads with her to get the car keys so they can leave.  Mid-panic, Rose stops, and looks at Chris with a deadly stare, giving some sort of Hal from 2001 Space Odyssey response- something like, “You know I can’t do that, Chris.”  Well he SHOULD have known, anyway.  But seriously, was Chris supposed to be surprised?  Were WE?  We already KNEW she was in on the plot- did Peele and the rest of the Get Out crew forget about that earlier scene?  They simply could have hinted at it- for example, having Chris discover a picture and ONLY one picture of Rose and the maid- or, they could have had Chris confront Rose about all the pictures later, at an appropriate time.  But the way it was done just didn’t make any sense.

Last but not least, once Chris escaped and made his way off the property, the movie just kind of felt like a pretty standard slasher film.  That’s really not my cup of tea, but even if it were, the cleverness pretty much seemed to dry up at that point, as blood took over as the main element.  The one small exception was the aforementioned wacky sidekick, who FINALLY provided a purpose as the film closed out, which is discussed more in the next section.  Speaking of which…

“Get Out” The Statement

Although the movie’s humor was unfortunately lacking, the critical reaction did a great job filling the void, albeit unintentionally.  Sometimes, life imitates art, and such was the case with the endless praise that this movie received for its social commentary, almost proving Peele’s point after the fact.  In the same way that Rose’s father “bragged” that he would have voted for Obama a third time if he could, the largely white, liberal movie critics could not stop gushing about the thought provoking metaphors used in this movie, basically showing well-to-do affluent white liberals using black people nefariously for their own selfish purposes.  Lest anyone think I’m exaggerating, some ACTUAL reviews stated that Get Out was “a compassionate, thoughtful look at race” (“compassionate”??), a “sharp-eyed allegory”, and “so special”.  The praise was so non-stop, one can almost imagine the critics saying, “I would vote for Get Out as Best Picture TWICE if I could!”

Lest anyone think that I, a white man, am offended at such a depiction, nothing could be further from the truth.  Politically, I lean more right than left, and enjoy few things more in life than seeing someone point out the hypocrisy of liberal virtue signaling.  I just think that this movie did not do a particularly good job of that, outside of Rose’s father getting acquainted with Chris early on.  The shindig (which turned out to be an auction for Chris’s “services”- talk about lack of subtlety!) just showed a bunch of aging white people, callously evaluating Chris to his face, as though they were shopping for a car.  As a Twilight Zone-esque plot device, it was fine.  As the kind of scene that was supposed to “make me think”, it fell very short.

The best thing I can say about this movie as a conversation about race is the statement that it DIDN’T make, which ultimately ended up making the movie slightly better.  As Chris nearly escapes, killing the whole family in the process (with his girlfriend being last), a police car pulls up to the property.  Jordan Peele allegedly considered having the movie end with Chris’s arrest at the gory scene he left behind.  Now I admit, THAT would have offended me, with the message being portrayed all too clear, to a public already sharply divided on this issue.  Fortunately, Peele went for the “safer” ending, having Chris’s best friend get out of the car, to take Chris away from the scene.  In addition to wisely choosing to end the movie on a “high” note (relatively speaking), it was also an unexpected twist, in a movie that seemed to have run out of them.  It also gave Chris’s wacky friend an actual reason to exist in the movie, and not a moment to soon.

So all in all, the movie itself was pretty entertaining, if a bit too gory for me in the latter part.  But as far as contributing anything more serious to the broader conversation about race relations in modern America?  Well………………………..