It’s impossible to pinpoint a single reason why South Park remains so incredible. For one thing, the height of the show’s popularity came years before the height of the show’s quality.  Think about it- when the feature film “Bigger, Longer, and Uncut” was released at the end of the last century, not a single word had yet been spoken by Butters, Randy was merely known as Stan’s dad, and Cartman was, in hindsight, a somewhat one-dimensional foul-mouthed ignoramus, still a long ways from the double-crossing schemer that we’ve come to know and, for lack of a better word, love.

It’s also refreshing, in a time where most topical comedy seems to be about finding the easiest path to getting a “WOOOOOO!!!” from a sympathetic audience, South Park continues to take shots at targets everywhere. Even longtime fans of the show will find themselves saying, “Heeeey- wait a minute!” at least once or twice an episode. All of its elite peers, such as The Simpsons and Family Guy, peaked years ago. With an ever-growing list of things to offend anyone, combined with the increasing madness of our world, the one which South Park resides in has more than enough reasons to be as compelling as ever.

Recently, though, the most important change to the show has been in the format. With prior seasons more or less relying on each episode as a standalone, last season followed a format usually suited for dramas, with continuous storylines throughout.  If not watched from beginning to end, the viewer could be left very confused.  (I’m speaking from experience.)  Given the renewed praise of the show, which introduced PC Principal as one of the show’s newest main characters, it’s no surprise that Season 20 is sticking with this format.

Also back are the Trey Parker and Matt Stone’s lightning-fast real time responses to current events. The commercial for the opener, featuring the townspeople singing the “new national anthem” in a scene not actually shown in the episode, imply a strong distaste for Colin Kaepernick’s perceived self-aggrandizing.  On the flip side, the opening scene of season 20 gives us South Park’s girl volleyball team, protesting a legitimate grievance during the National Anthem.  In this case, the target is the public’s reaction to the protest, too caught up in turning the National Anthem protest into a sport, to consider what the point of the protest might actually be.  On the show, the cause was misogynistic cyberbullying, serving as a stand-in for real life police brutality.  This is classic South Park- before you can get too comfortable nodding up and down, clapping like a trained seal at your TV set as the host (or hostess) validates your etched-in-stone worldview, you instead find your worldview being challenged.  In other words, those who want more public attention focused on injustices, might wonder if Colin Kaepernick’s divisive tactics are the right way to go about it.  On the other hand, others might wonder if Kaepernick’s cause, if not Kaepernick himself, might at least be worth considering. 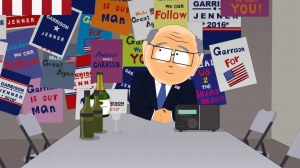 But that wasn’t even the biggest target of the night for this episode. Returning to the spotlight, more relevant even now than when the joke was first introduced, was “Giant Douche versus Turd Sandwich.”  This has gotten some criticism from other parts of the Internet, seemingly because some take umbrage at Hillary Clinton being referred to as Turd Sandwich.  Lacking in self-awareness, many of these people scream at South Park’s “false equivalency” of Donald Trump’s awfulness and Hillary Clinton’s (from their point of view) far-less dangerous qualities.  Always ahead of the curve, Parker and Stone seem to have anticipated this in advance, in the form of Randy Marsh, incredulously wondering how anyone can possibly consider voting for a Giant Douche (Trump) over a Turd Sandwich (Clinton).  In fact, those paying attention to the episode in a non-partisan light would see that they did actually spend more time skewering Trump- with Mr. Garrison used as his stand-in, to hilarious effect.  Some pro-Clinton critics also griped that the level of Trump bashing wasn’t enough, which missed yet another point of this plotline- that Trump’s buffoonish behavior (or in this case, Garrison’s) has been a net positive for the guy.  Besides, they had his solution to getting rid of America’s enemies as “f*cking them all to death”!  What else were they supposed to do, exactly, have him shoot someone on 5th Avenue?!  That wouldn’t have mattered, either!

But wait- there was even more to this episode!  It was a long summer, and there were plenty of other topics to address, as well.  Thanks largely to Eric Cartman, we witnessed jabs at-

The last one- which, in fairness, had nothing to do with Cartman- is of particular interest.  Although it was fairly lonely as the one target solely aimed at conservatives, it also is the one that has the potential for the most mayhem this season.  (It took every ounce of strength for me not to type out, “bare the most fruit.”  Forgive me, dear reader.)  Starting out as relatively harmless nostalgia vehicles, mostly by mentioning great movies of yesteryear, the berries find their way into sinister territory, reminding Randy of a time when there weren’t as many Mexicans in the United States.  Not one to normally figure out when he’s being duped, Randy almost immediately senses that something is horribly wrong.  This was quite out of character, but perhaps the writers thought that having a beloved character like Randy susceptible to racism was a bridge too far for viewers to cross.

The surprise I felt at Randy’s awareness at the situation, however, was nothing compared to the twist ending, though, as we discover that the troll is Kyle’s dad, of all people.  Near everyone in the world, both South Park’s and ours, figured it was Cartman, but the South Park writers have shown themselves to be capable of some pretty jarring twist endings, ever since “Scott Tenorman Must Die”.  Why a mild-mannered lawyer, usually one of the more level-headed characters on the show, would take to the Internet to troll elementary school girls is anyone’s guess.  Finding out why is a good reason to keep tuning in, in case you needed one.  Which you shouldn’t.